While I was researching the NoCode world (If you are interested, you can read more about here), I noticed many founders showed their business statistics, built their startups publicly, and shared their learnings and mistakes on social media.

For someone from Latin America, the first thing I thought was that you had to be completely crazy to do something like that. But when I got more involved, I discovered that it makes a lot of sense and is a movement that, at least, must be considered.

What are Open Startups?

These are those that have their numbers open and share their evolution from month to month. Generally, some metrics such as costs, income, users, visits, and/or subscribers. Digital services, big products, and platforms are following a path to greater transparency by giving users access to their information. These startups, or not so much anymore, usually have a section on their website where they display graphics including data, that when seen for the first time can be surprising to the viewer.

Showing “verified” traffic has been around for a long time thanks to Google Analytics and its integration with SimilarWeb.

A solution needed to be found from the revenue side, and Stripe helped a lot. They provide a modern solution with payment tools aligned with the advancement of the rest of the industries (Paypal lagged a bit behind). But they are also focused on providing awesome income graphs and stats. Having this information allows us to better understand what is happening with the startup to make better decisions.

And if that wasn't enough, that's where Baremetrics (the Google Analytics for revenue) was born, which, taking the information from Stripe, gives even more interesting insights about the movements of $, churn rate, and subscribers behavior.

Buffer and Ghost were the ones who started this movement, then Baremetrics simplified it, and Pieter Levels (from Nomadlist and RemoteOK) popularized it.

There are several reasons:

To access this information, select /open on the desired startup URL.

It is no coincidence that most of the websites mentioned below were present on the NoCode article.

Some of them only share on social media without having /open:

A different decision is to send the information in a specific monthly newsletter, which is received by people interested in watching the numbers: 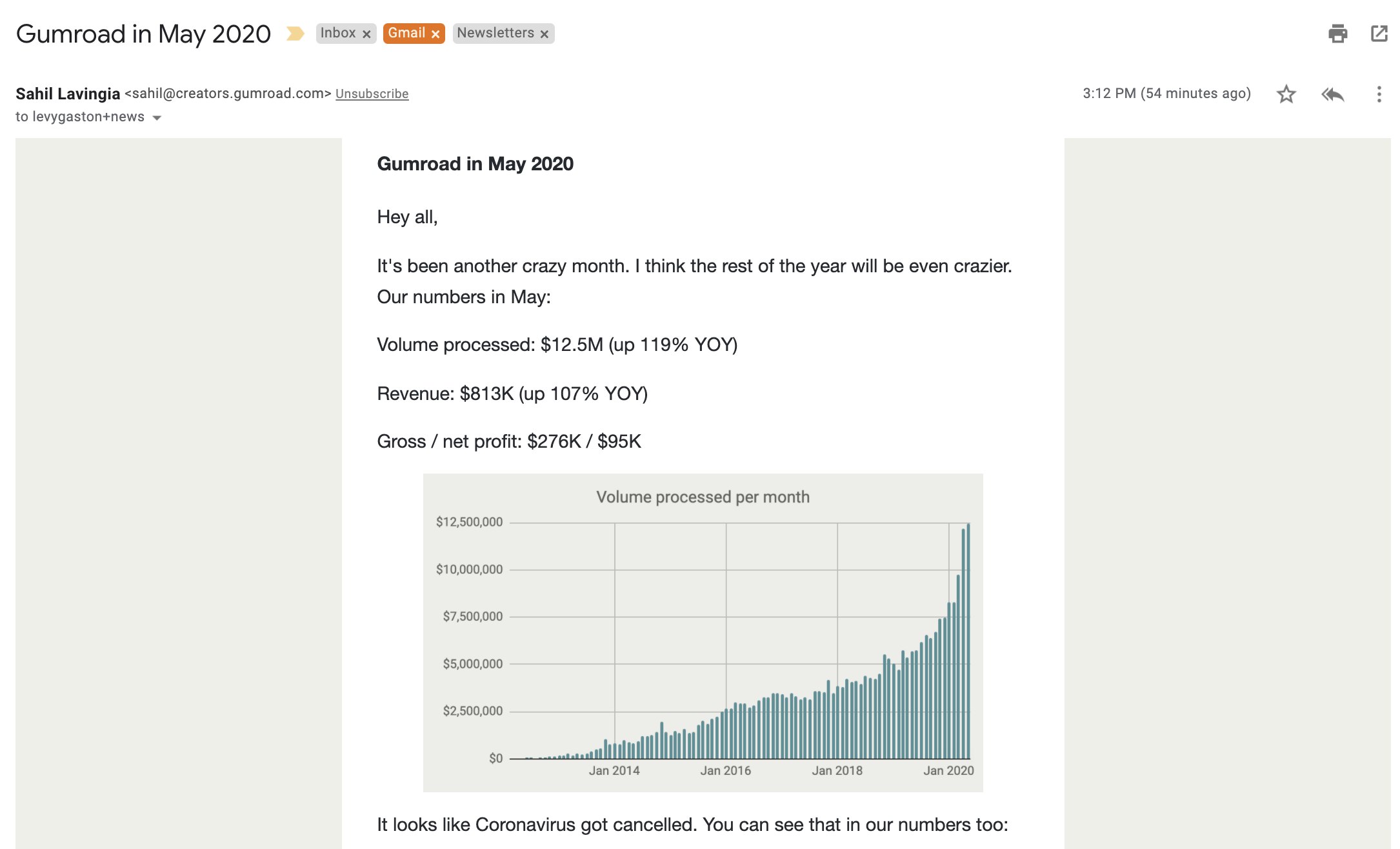 List of those who grew the most in a week:

Some communities were established based on this concept, in which, under the premise of being able to be more productive and talk about what they are building together, users upload their to-do lists and share their progress.

If gamers do it, why not makers?

Besides the numbers, which are pretty interesting, building in front of an audience is a common practice.

There are many founders streaming in Twitch while programming or adding new features. Under the same concept and goal of opening the numbers, but more focused on involving users in the process, it's becoming increasingly frequent.

Of course, an example from @levelsio:

OA different way to build in public is to make the next steps in the roadmap visible. Or better yet, involving early decision-makers in assigning new functionalities and features.

CollectedNotes It's surely doing very well, they have a group of users expected for upcoming improvements, and providing good feedback based on our experience.

It is true that in many countries the concept of opening and showing revenue might not be accepted (again, it may seem the most interesting metric but not necessarily when it comes to being an Open Startup).

That's why there are companies that only share their numbers with employees or through newsletters to limit and control the information.

A nice extreme approach is to have board meetings live open to anyone to watch:

It's also often used to gain validation for possible partnerships or sponsorships, as the example of Pulsión Digital: and SinOficina:

Why some people stop doing it:

Buffer was one of the pioneers and it's interesting why they recently stopped showing several metrics.

A different case is the one of Transistor.fm that stopped being an open startup and they explain their reasons in this podcast.

Analyzing the cases of Buffer, Transistor, and inquiring in comments on Twitter of those who stopped with this practice, these are the most highlighted points I found:

This is what concerned me most at the beginning. How good can it be to show details to the competition or even worse, to encourage others to start something similar?

Some of the companies above that don't have open numbers anymore, shared too much. For example, there are formulas for how they calculated salaries and cost structures.

But at the same time:

Pieter Levels - "A big fear to go open is that competitors would see your numbers and clone you right? Sure, but it’s also a decent test for how good and differentiating your product is. If keeping your revenue a secret is your sole differentiator as to why you’re succeeding, that’s a problem." 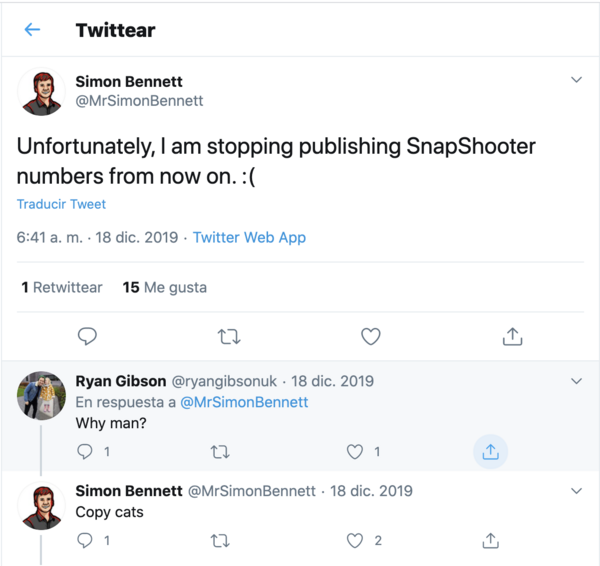 Examples of people who share not only when things go well:

On my side, I started by sharing what I was putting together to get recruiters to upload their searches on WeRemoto as a marketing strategy.

Finding that those posts were the ones with higher interaction, I confirmed the positive results from doing it. There was genuine interest in seeing open numbers and following a side project's progress.

At WeRemoto.com/open you can see the sessions, users, and conversions per day since I launched it. Moreover to the monthly evolution of subscribers.

At the 2nd or 3rd month 2 I noticed some essential things: 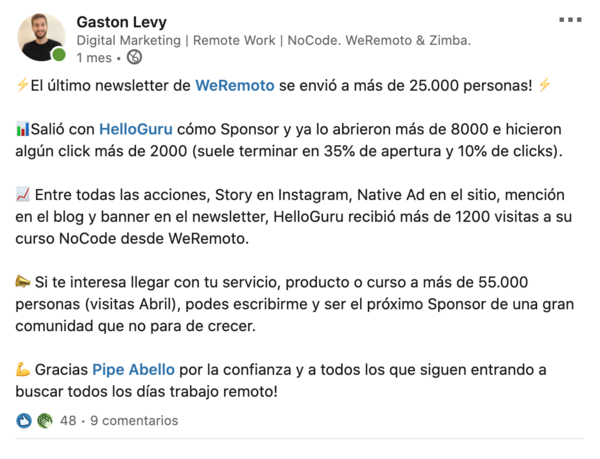 As an added benefit, doing so produced me valuable contacts and conversations, which were born by the posts of the numbers. Very talented people wrote to me willing to collaborate with the blog, SEO, and even potential clients for my marketing agency.

In this case, because I wasn't working full time on it, I was not sharing revenue. Still, it was not necessary to attract sponsors, recruiters, and people looking to work in WeRemoto. And I don't even think having the revenue 100% open it's a good practice.

Besides, at this time for me, it is more important to build an audience, to continue doing WeRemoto to keep learning about new tools and show that it is possible to get a better job in USD and with better conditions (from home). I obviously want and need the revenue, but it is not the most essential point in this project.

In the end, if you don’t feel comfortable opening a particular metric, it's ok. There is no definition or rule on what to share.

From the start, WeRemoto did "well" in terms of metrics. I'm not sure whether I would have shared them in case it didn't. 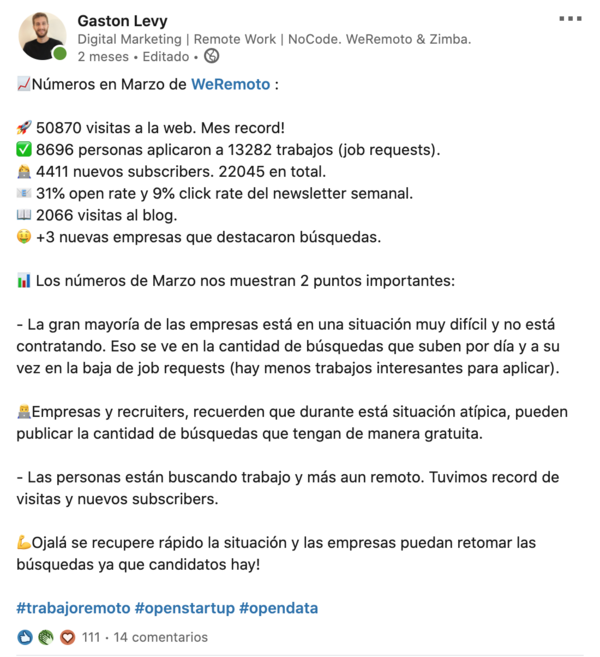 The simple answer is that you should only do it if you have a motive/motivation. For the simple goal of joining the movement without being very sure, I don't think you'll achieve that much. It's likely that you notice it's not flowing or probably you’ll stop doing it in a short time.

Cases in which I recommend sharing:

The easiest and fastest approach is to build a Google data studio connected with Analytics for the main metrics.

For numbers that Analytics does not have, you can put together a Google sheet, and send the info to data studio to make it more presentable (Stripe is only available in MX for Latin America).

We all want to generate income from what we do, (side projects, MVPs, businesses, ventures, whatever), it should not be a problem to share specific metrics and what we have learned along the way.